He Said/She Sighed – Part One

I dislike lists of rules for writing fiction. There are many good writers whose work I can’t stand. And many books I’ve loved that were obviously flawed. I would not advise anyone to make a paint-by-number novel.

Rules I roll my eyes at are nitpicky particulars like: Use “said” as your only verb in dialogue. That is a stupid rule. Or, rather, it is stupid to think of that as a rule.

It is important to know the effects of various writing techniques so you can use those techniques deliberately for greater effect. Knowing that readers barely notice the word “said,” so it’s okay to repeat it over and over on a page, is important.

But the rule “only use said” is not telling you how to get the effect you want; it’s telling you what effect you should try to get. And that is not a matter of correctness; it is a matter of taste. And you and the rule-maker may not like the same books. Just because he can’t stand reading “he whispered” or “she yelled” doesn’t mean it’s bad form. It’s simply his pet peeve.

It is bad writing to have people shout and cry and whisper and moan about what’s for dinner. But it’s bad because the scene is sentimental or melodramatic not because the verbs are grammatically incorrect. When a scene calls for it, these verbs can say a lot in one little word.

But it’s okay to use metaphorical verbs like “babble” and “snap” and “croak” and, yes, even “hiss.”

Note to nitpickers: The hiss of speech doesn’t have to be on sibilants. Humans do not hiss. The meaning of “hiss” in dialogue is not “sssss. If someone is hissing “ssstay away sssilly” you’d better spell it out because no reader is going to assume the speaker is actually hissing the sibilants – unless you’ve already said they’re insane and one of their symptoms is hissing like a snake. Hissing in dialogue means to speak in quiet anger. Like the hiss of a snake or a cat, it is a small noise with a big angry warning attached to it. It is a perfectly good word for a whisper-shout. So please don’t show off your ignorance by calling out an author for saying a character hissed, “Pick that up” to her unruly child in church. You might not like the usage, but it is not bad grammar.

You can have people spew their words, spit their words, growl them, bark them, bray them if you like. None of it is grammatically incorrect. Just as you can have your character drag her heart to the door, once she gets there she can sigh hello if you want her to. Readers love a good metaphor; why bar them from dialogue? The question is not whether it’s correct usage. (It is.) The question is whether it works. If it enhances the scene and makes it clearer, more vivid, more real and alive, then it’s good usage. If it obscures the action and slows the understanding and annoys the reader, it’s bad usage.

Using the invisible “said” most of the time will make other verbs more effective when they are called for. If you as a writer never feel they are called for, that’s fine. But if you do feel like your character needs to shout or whisper – because, say, they’re actually shouting or whispering – just say so. And if you think it enriches the scene, the character, and the meaning of the dialogue to have your character screech or purr or ooze her words, then let her do so. If the scene is good, it will work. (It will annoy some readers but it will delight others. You can’t please everyone.)

I have more to say on this issue, but that’s enough said for this Friday. 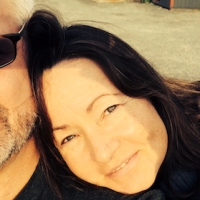