Posted on February 1, 2014 by Catherine Austen

Cynophobia. The fear of dogs.

It’s not quite as common as the fear of snakes or spiders or bees, but Cynophobia comes pretty close, and it’s a lot more debilitating for suburban schoolchildren. Your neighbours aren’t walking their tarantulas down the street while you’re making your way home from school, are they? When you visit Aunt Joan, her honeybees don’t rush to the door buzzing and jumping and knocking you down, do they? Your dad doesn’t scowl at you and say, “Oh my god, it’s just an anaconda. Give it a pat,” does he? Nope. Everyone knows those critters are creepy. But the hounds from hell? They’re supposed to be your best friend.

And when dogs kill people, they do it in a way that taps into our most primal fears. Ask yourself: how would you rather die: allergic reaction from a bee sting; poison from a snake bite; or being ripped to pieces by a team of sled dogs?

Dogs remind us that we are meat. And there are few thoughts more terrifying than that.

So what to do if you’re afraid of dogs? Become their masters, obviously. Boss them around. Make them sit up for a treat. Tell them to go lie down when they start looking at you and licking their chops.

Too ambitious? Start slow. It’s called “exposure therapy.” Yup, you have to expose yourself to the dog. No, not that way. Just be around it. But don’t rush things. Start by looking at pictures of dogs, then movies, then dogs behind fences, dogs on leashes, and eventually dogs just hanging out across a room, then closer and closer and closer until you can pet one without anxiety.

It’ll take a LONG time. Start with puppies, then little dogs, medium dogs, then big dogs. Don’t try it alone. And only do exposure therapy with gentle relaxed dogs. Even people who love dogs are scared of scary dogs.

Scary Dogs Fact #3: There were 27,752 reconstructive procedures performed in the USA in 2012 to repair injuries caused by dog bites.

Realism is the best way to counter fear. But realism includes being wary. Not freaking out in terror because a dog is looking at you. But keeping your distance from strange dogs. Aggressive dogs, fearful dogs, sick dogs, and the odd just plain weird dog can hurt you if you approach them recklessly, all up in their face like, yo dog, wassup, give me a pound. They may lock it down in their jaws, like that’s wassup, fool.

Don’t approach dogs you don’t know. Don’t even make eye contact. Don’t leave your baby sister alone with a dog. And if your frisbee lands in a yard with three big dogs, don’t go fetch it.

I remember once walking my dog Charlie in the back woods when a little girl, maybe eight years old, ran up shrieking gleefully. In hyperspeed, she bent down and grabbed Charlie’s face and planted a kiss on her snout. I thought, “Oh my god, my dog is going to bite this kid’s nose off and leave the poor girl disfigured for life.” Fortunately that didn’t happen. But it could have. Don’t do stuff like that. The incident left me with a phobia of children – seriously, every time I walked my dog after that, if I spotted a kid coming our way I’d break out in a sweat.

Scary Dogs Fact #5: Children suffer half of all dog bites, and the smaller you are, the worse your injury is likely to be. Of 36 deaths due to dog attacks in Canada from 1983-2012, all but 3 victims were children under 12.

(FYI, Cynophobia is also the name of the fear rabies, but we’re not getting into that because that fear ought to have its own name. Nobody sees dripping fangs and thinks, “Oh no, I might get rabies!” They think, “Oh no, I might get my jugular vein ripped out.” Rabies shots are no biggie compared to that. But I digress…)

If you are bitten by a dog, see a doctor. Seriously. Spit is full of viruses and bacteria — which we’ll talk about later this month. (Way scarier than dogs.)

In 28 Tricks for a Fearless Grade 6, Dave Davidson cures his classmate Vanessa’s fear of dogs, sort of, not entirely but he gives it a good shot, with exposure therapy and lots of zany goings-on (“I’m not exposing myself to anyone,” Vanessa says. “Let’s get that straight.”) so Vanessa can  hang out with her friend Robbie even after he gets a dog. 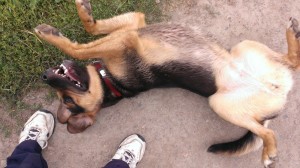 Dogs really are man’s best friend. You can’t cuddle up with a spider. Your snake won’t bring you toys to play with. And bees will never mourn you. It won’t really matter if you never conquer your fear of those other animals. But a life with dogs is pretty wonderful (so long as you’re not one of those unlucky five million).

This is a fear worth slaying.

(Fun Facts are from the State Farm insurance page Fido Bites, the Dog Owners’ Rights dog fatality page, and the CDC Dog Bites page, which you should check out if you’re considering getting a dog.) 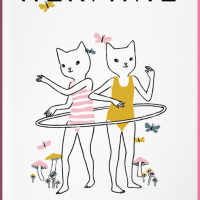