Posted on February 11, 2014 by Catherine Austen

Mysophobia. The fear of being contaminated by germs.

It’s what Howard Hughes, Howie Mandell, Saddam Hussein and Joan Crawford had in common. (And probably the only thing they had in common.)

Ever since Louis Pasteur discovered the germ theory of disease, humans have cleaned up and lengthened our life spans. Doctors no longer go digging around in dead bodies and then head to the operating room to work on a live one. (It took an awfully long time to apply that theory to the use and re-use of needles, but we’re getting there.)

It is wise to be afraid of germs. They are far more harmful than sharks, dogs, heights, spiders, darkness, or any other feared thing you can think of. Germs kill millions.

But phobias are not wise fears. They are fears that take control of your mind and induce panic even when there is absolutely no danger.

If you happen to be in a Kenyan village when Ebola breaks out, or you fall into a crevasse in Kitum Cave, or you’re handling the virus in a Biosecurity Level 4 storage area and your space suit gets a tear, you have good reason to fear. (Not to panic, but to take prompt action to protect yourself and others.) But mysophobics are not anywhere near Ebola. They’re probably not even near the common cold. They’re just alive in a germ-filled world, and they can’t stop worrying about the possibility of being contaminated.

Mysophobia tends to worsen over time, because there is nowhere to escape from anxiety. Germs are not like spiders, which you can see and squash. They’re not like confined spaces, which you can just avoid. They’re everywhere. And, most importantly, they’re all over other people.

Mysophobics may isolate themselves to avoid the people and places harbouring germs. And they may develop an Obsessive Compulsive Disorder – with frequent hand-washing, bleach spritzing, and outfit changes – to calm their intrusive thoughts and fears and give a temporary sense of control. But isolation and compulsive behaviours just strengthen the neural pathways connecting thoughts of people/germs/the-world-at-large with terror.

So basically you’re a mess. All because of some primitive sort-of-life-form that you can’t even see.

So what do you do? Get therapy. Seriously, this is a phobia that ruins lives and you may need help to beat it. Your treatment will likely include some cognitive behaviour therapy to calm yourself, expose yourself to safe places and people, and delay your rituals.

I’m not sure if reading about germs will help – I just read The Hot Zone and I wanted to get rid of all my pets, cancel my travel plans, scour the house and never let visitors in again – and I’m rather comfy around germs and disorder. So you should probably skip the library.

Don’t worry – you’re not training to embrace contamination. You’ll always want to be cautious. Don’t sweep up a shed full of mouse poop without a mask. (I did that once and got sick immediately – it hit me like a baseball bat while I was still sweeping, it was so fast.) You’ll never have to eat off the floor of a monkey cage. You just have to get used to moving through a germ-ridden world without panicking.

You can beat this fear. Our species evolved eating roots right out of the dirt and swallowing other animals and all their germy bits whenever we could catch them. We are equipped for life amid germs. (So long as Ebola never hops on a plane, that is – in which case, keep all your mysophobic strategies handy because you’re going to need them.) 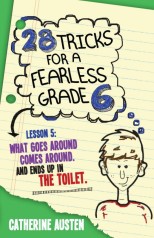 In 28 Tricks for Surviving Grade 6, Eric tries to get food poisoning to get out of the school dance and Andrew tries to get laryngitis to skip the public speaking competition. This is completely logical for those of us who are 11 and not mysophobic. Germs are no biggie compared to the social experiences we dread. (“Oh no, I have the flu, guess I can’t go to that family thing at the in-laws, darn it.”)

Leave a comment about your fears during February and you could win a copy of this March 2014 release.

(Photos: the milkmaid is by Marin from Free DigitalPhotos.com; the hand-washing poster is from the New Mexico Health Department – thanks.) 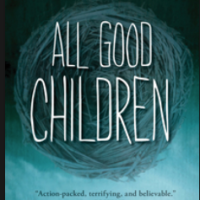