Posted on September 28, 2009 by Catherine Austen

Last night I cuddled up with my 7-year-old and read a few chapters from the Deltora Shadowlands series by Emily Rodda. It’s our habit to read three chapters a night. With Rodda’s books, storytime usually ends with a cliffhanger and a whining plea for more (which I never give in to unless I’m dying to know what happens next). Last night my son pleaded, “But I can’t survive without hearing the next chapter!” Wow. That’s some compliment to Emily Rodda.

My 14-year-old son adored her books in his younger days, too. While I’m reading them to his brother, I sometimes catch him hovering nearby. In part, he’s nostalgiac, but in part he’s still genuinely interested in the tales. He no longer reads much fantasy (it’s not my preferred genre either), but it’s hard to close the cover on a likeable hero facing a hideous beast with near-impossible odds of surviving, especially when a kingdom’s fate rests on the outcome.

I love rediscovering favourite or forgotten children’s books that I once read with my oldest son. I’m lucky to have the pleasure of reading them all over again, seven years later. Sure, I could read them anytime, but reading out loud to your child is a whole different experience than reading on your own. Many books I’d never consider reading for my own pleasure are great with kids who love them.

The first time I read Captain Underpants (to my younger son), we read the whole novel in one evening, giggling in bed. When I closed the cover, he smiled and said, “That was awesome,” with a faraway look in his eyes, like he’d just experienced something amazing. And he had–he’d never thought a book could be like that.

My oldest son missed that series. But he did catch Harry Potter, Cirque du Freak, and a zillion other books I might never have read if it weren’t for storytime with him. Even now, we’ll sometimes read the same book (Feed, Probably Still Nick Swanson, America), although we don’t read it out loud together.

Recently my younger son has lost interest in picture books. He’s happy to have one in the afternoon, but at bedtime he wants a novel. And not an early reader, which he likes to read on his own. That means I don’t get to read Frog and Toad out loud to anyone anymore. But I get to hear them read aloud to me, and that’s a welcome sound.

Everything changes, so they say. No use clinging to the past, or hurrying the future. I miss reading picture books at storytime. And I miss reading to my oldest son. But I can’t complain. Because tonight I get to read three more chapters of Deltora to a captive audience. (Or maybe four, if he can’t survive without knowing how it ends.)

Posted on September 24, 2009 by Catherine Austen

When a friend told me that she pre-ordered my novel, Walking Backward, from Amazon.ca, I got all excited to think that was even possible. I visited the site, found my book ranked 135,629th, and felt happy to be there at all.

On a whim, I plugged my name into the various search engines to see what came up…

What came up was Jane. Jane Austen herself, Jane’s neice Catherine Hubback (a writer of ten novels, none of which I’ve read), Jane’s character Lady Catherine in Pride and Prejudice, and Jane’s character Catherine in Northanger Abbey (“in which Catherine is twice plagued by terribly tragic timing.”)  I have always felt pleased to have the same last name as Jane, but honestly, how many pages of her listings can a person take?

The search was not entirely fruitless, though. I learned of a new book: Pride and Prejudice and zombies: the classic Regency romance–now with ultraviolent zombie mayhem, by Jane Austen and Seth Grahame-Smith. (I do not think Jane was aware of the cooperative effort.) I put that one on hold at the local library. There’s a long waiting list — it was a best-seller — but I’m sure it’s worth it.

Searching my name on Bing introduced me to the work of an Argentinian photographer on Flickr. He is a man, possibly named Frederico, who for some reason streams his portraits under the same name as mine. The search also uncovered my first blog entry, which states,”I’m totally confused.” That’s the only bit of the real me out in cyberspace.

My name search on Google had better luck. Peppered among the gazillion Jane Austen listings was evidence of my book, listed at several bookstores and Orca Book Publishers. This search introduced me to a Londoner who shares my name and has a Facebook page featuring herself on horseback, and a mover and shaker named Catherine Austin Fitts who has many listings under her second-rate spelling. Again, the only listing of the real me was the “totally confused” bit. (More applicable now than ever.)

My name search on Yahoo called up more than my total confusion. It listed CM Magazine‘s review of Walking Backward and, surprisingly, several reports on draft bills for Canadian endangered species legislation, which I wrote back in the 1990s when I was immersed in that field of work. That was a fun trip down memory lane. (Unfortunately it didn’t bring back my former knowledge of HTML coding so that I can make a decent website that’ll actually appear when I search for myself.)

A search for Walking Backward brought up even less of the real me. But I discovered that walking backward sharpens the thought process, according to a Dutch study. When in doubt about what to do, backing away slowly seems to be the best course of action.

This morning my book ranks 139,650th on the Amazon site. Somehow 4,000 books have rushed ahead of mine in sales in just 12 hours! (Possibly because mine is not actually released yet, but I suspect other reasons, too.)

Online self-searching is starting to bring me down. I have to put myself out there more. I should register my website with search engines and beg friends to shop online. I’ll get out books on web design — right after I read the zombie novel — and make a website everyone will want to visit.

Or maybe I should just take a step back, then go write another good book.

Being Read by Total Strangers

Posted on September 21, 2009 by Catherine Austen

I stumbled onto my first book review a week ago (in CM Magazine). What a strangely thrilling experience. It’s what prompted me to start a blog and web page (http://www.catherineausten.com/ — built from a template and about as gripping as this blog). It is just slightly possible that a total stranger might like my book and want to know more about my writing.

Right now, strangers do know more than friends about my first children’s novel, Walking Backward (to be released next month by Orca Book Publishers). My teenage son proofread the manuscript before I sent it to the publishing house. He is so far the only person I know personally who has read it. (My writing group heard the first chapter only; I usually bring picture book texts to our monthly meetings.)

I don’t share much unpublished work outside my writing group, and what I do share doesn’t get far beyond my husband and children. It’s not that I don’t feel supported by my friends and family — I do. They pick me up when I’m down. They tell me wonderful things about myself. And they always say it’s great that I’m writing. But they usually have no idea what exactly I am writing about. I don’t ask them to read 40,000-word manuscripts, or even 400-word manuscripts. Maybe that’s why they’re so supportive of me.

Many of my acquaintances don’t even know that I write fiction. This has made it awkward to build a guest list for my upcoming launch party. I’ve been approaching people I’ve known for years with a hesitant, “Um, so, I wrote this book….” They are always surprised to hear it, and they are without exception supportive. (Having a book published is undeniably cool. Sadly, so different from having a book unpublished.)

The best thing about friends, relations, and acquaintances reading a book only after it’s published is that it’s too late for their advice, and we both know it. Loved it? I’m so pleased. Hated it? Might as well keep it to yourself. Friends don’t have to drum up constructive criticism and I don’t have to pretend their suggestions help me with my craft. I like that give and take with writers and editors (or at least I like it after my hurt feelings subside and I think clearly about their suggestions) but friends don’t need that burden. Friends just need me to sign their copy with something heartfelt.

Fortunately, my first book review was awesome. It was thorough and praising, and ended with those beautiful words, “Highly recommended.”

So now that I’ve had that experience, I’m not going to read any more.

Posted on September 14, 2009 by Catherine Austen

First attempt at a blog. I am totally confused, but I take heart in the knowledge that no one will actually read this.

My first children’s novel will be published next month. Hopefully I’ll have things to write in the coming weeks about book launches, reviews, and young readers. 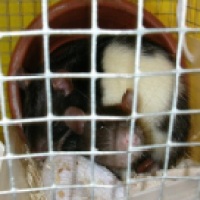