Friday Fable: A Writer, her Delete Key, and their Story

Posted on September 9, 2011 by Catherine Austen

You may know the old fable, A Man, his Son, and their Donkey:

A man set out on a trip with his son and their donkey. His son sat up on the donkey while the man walked beside them. They were happy on their way.

As they passed through town, a man said: “That healthy boy is riding while his poor old father trudges alongside!” So the man set his son on the ground and rode the donkey himself.

Another man remarked: “That man rides like a king while his poor boy is exhausted with walking!” So the man dismounted, and both he and his son walked beside the donkey.

A woman teased: “What idiots you are to walk when you have a donkey to ride!” So the man and his son both got on the donkey.

Another woman scolded: “You’re cruel to burden that poor little donkey with both your weights!” So the man and his son carried the donkey on their shoulders.

A group of children laughed and said, “You are either foolish or crazy!” And so  the man put his son back on the donkey and walked beside them, just as they had begun their journey. And they were happy on their way.

And the moral is: Try to please everyone and you will please no one.

That is a good old tale. But if Aesop had been a modern slave to the written word, perhaps he’d have called his story A Writer, her Delete Key, and their Story:

A writer spent many months drafting a teen novel about a girl’s reluctance to grow up. She was happy in her writing. She felt she’d captured some small truth about life. Soon she’d revised her manuscript enough to send it to a friend.

“You should add a mystery,” the friend said. So the writer added a mystery to her novel, which was now about a girl trying to find a missing friend while dealing with her own reluctance to grow up. Soon(ish), she sent it to a critique group.

“You should add a romance,” a critiquer said. So the writer added a romance to her novel, which was now about a girl, who was reluctant to grow up, who fell in love with the main suspect in her friend’s disappearance case. Soon(ish), she sent it to an agent.

“We’re looking for paranormal romance,” the agent said. So the writer added an otherwordly setting to her novel, which was now about a dead girl living in an upper tier of Hell who was trying to solve the puzzle of her own disappearance and death on earth (and how that might have tied in with her former reluctance to grow up), with the help of a very handsome minor demon with whom she was madly in love.  Soon(ish), she sent it to an editor.

“We’re looking for more humour,” said the editor. So the writer rewrote her novel, which was now about a hopelessly clumsy girl who wished she would never grow up, and her wish was granted by a very handsome minor demon who carted her off to an upper tier of Hell, where together (very clumsily and with all sorts of hilarious slapstick moments)  they solved missing soul and object cases (because souls were always wandering out of their own hell-tiers and hiding the demons’ whips and it was all really funny stuff).

Soon (three years after she’d begun her very first draft, actually), she sent her novel to a writer friend whom she really respected.

“Are you sure this is what you want to do with your life?” he asked her. At which point she had a minor breakdown, burned all her manuscripts, spent some time in the woods, and eventually picked up a pen and began to write a story about a girl who never wanted to grow up. And she was happy in her writing.

And the moral is: Write your own story.

8 Comments on “Friday Fable: A Writer, her Delete Key, and their Story” 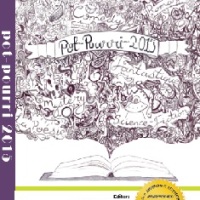