Friday Fable: The Writer and the Word Limit

You may have heard the old story, The Crow and the Pitcher:

A crow was nearly dead of thirst when he spied a pitcher of water on a picnic table just beside the dried-up river bed. He flew over and tried to take a sip but, alas, the pitcher was close to empty. Only an inch of water remained in the bottom, too far for the crow’s beak to reach. He tried to break the pitcher or knock it off the table but he was in too weak a state.

The crow gave a great sigh and thought, “Crap. It’s either die of thirst next to this jug knowing all the other crows will laugh about me for generations to come, or I’d better think up a way to get that water. Hmm. What would Archimedes do?”

The crow dragged himself to the riverbed and picked up as many stones as would fit in his beak. He dropped them into the pitcher, one by one, and the water rose to the brim and the clever crow quenched his thirst.

And the moral is: Necessity is the mother of invention.

That is a good old tale, but if Aesop were a modern slave to the written word, he might have called his fable, The Writer and the Word Limit:

A writer was nearly dead of neglect when he spied a call for submissions in a literary magazine in the mail just beside two form rejections. He was thrilled to read that his new short story fit the magazine’s theme of “how your mother ruined your life.” But, alas, the magazine had a 5,000-word limit for fiction submissions and his story was 8,000. He tried line-by-line editing, cutting out adverbs and hyphenating where possible, but after a week of revising, the story was still 7,200 words.

The writer gave a great sigh and thought, “Crap. It’s either never publish anything again, knowing all my writer friends will ask, “Still working on that story collection?” for years to come, or I’d better think up a way to reduce my word count. Hmm. What would my mother do?”

The writer dragged himself to the keyboard and read through his story pretending to be his own mother. “This bit’s stupid,” he muttered, chopping three paragraphs. “You made that point already,” he snapped, chopping two more. “Who the hell cares about this side character?” he said as he cut half a page. And so it went, all afternoon: “I saw this coming.” “I’ve read that a hundred times before.” “Nice wording but I couldn’t give a $#!+,” etc. He went through the story four times in his mother’s persona and, little by little, the length condensed to 3,000 words and the clever writer submitted his story. And the editors loved it.

And the moral is: Sometimes we need to be a little harder on ourselves. 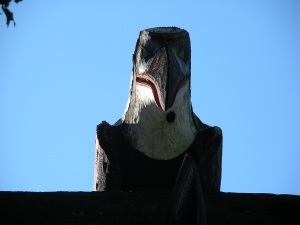 And that’s my Friday fable, sparked by writers’ guidelines that suggested, “Get someone who hates you to critique your work.” Good advice, but I’m too thin-skinned. (And if you’re wondering about my mother, nah, she was a sweetheart. She’d read anything I wrote and say, “That’s wonderful, dear.”)

May all your Fridays be fabulous. Have a great weekend.

7 Comments on “Friday Fable: The Writer and the Word Limit”